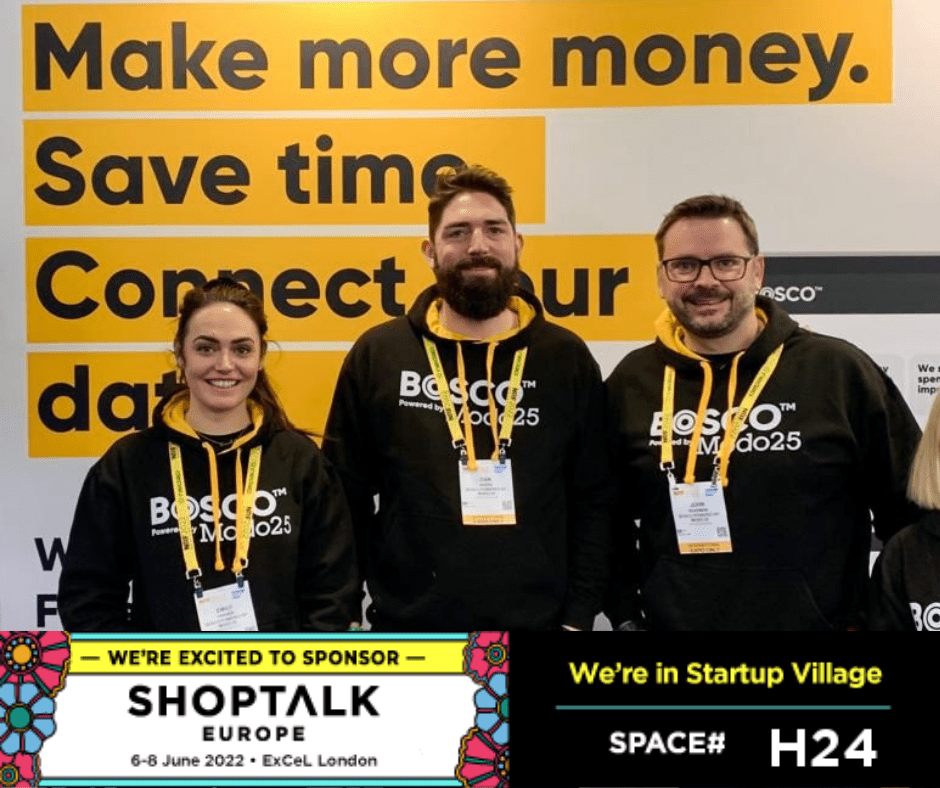 The team here at BOSCO™ powered by Modo25 are excited to announce that we will be attending and sponsoring Shoptalk Europe in the start-up village on 6 – 8 June.

Shoptalk is a highly recognised event with the world’s largest community of retail changemakers. Shoptalk was founded in 2016 and within three years, became America’s largest retail show. This is the first year for Shoptalk to branch out to Europe and is being held right here in the Capital.

Shoptalk Europe unites the European retail ecosystem at the most senior level. Over the three day event, we will be amongst 3000+ large retailers, start-ups, tech companies, investors, media, and analysts. Additionally, we will have the chance to speak with over 200+ industry experts, who will be giving talks on upcoming industry trends and opportunities that are too good to be missed.

Some of the names on the agenda include Alibaba, Asos, Klarna, Meta and Amazon. There’s music from Basement Jaxx, Kate Nash and The Feeling at the Shoptalk party on Tuesday evening. Keep an eye on our events page for more information on our Shoptalk pre-drinks.

We are proud to sponsor this year’s Shoptalk Europe, alongside other big names such as Microsoft, Snapchat and Shopify. Take a look at the agenda to find out more and tickets are still available on their website.

The media coverage for the event will be extensive with reporters from Forbes and CNBC, as well as our US media partner RETHINK Retail. If you can’t make it this year but still want to tune in, you can sign up via the Shoptalk website to make sure you don’t miss a thing and stay tuned on our social media for content from the event.

We’ll be in the Startup Village at stand H24, if you’re attending Shoptalk and would like to chat about BOSCO™ – let’s grab a coffee.